Kanjeevaram Silk Saree : Tamil Nadu | UPSC | Topic Based MCQ  | Why In The News ?

News : National award winning artisan weaver, B Krishnamoorthy, has created a repository with samples of all the designs, patterns and motifs traditional to Kanjeevaram silk sari weaving, preserving fine pieces for next generation. 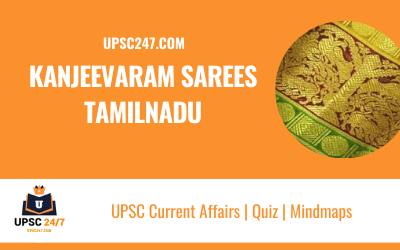 About Silk Production in India

There are five major types of silk of commercial importance, obtained from different species of silkworms. These are

What Is Vanya Silks ?

Except mulberry, other non-mulberry varieties of silks are wild silks, known as vanya silks.

Components of the scheme :

Other GI tagged Sarees In India :